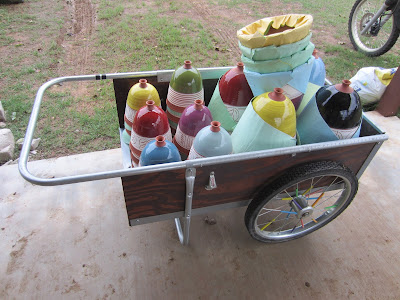 Last March, we did a show at the Lady Bird Johnson Wildflower Center in Austin, Texas.  The grounds of the center are beautiful. We just found out that we have been invited back to the show again in 2016...that's terrific news!  Last year the show was decent, despite almost being rained out.  We are excited to give it another go.

While unloading the truck and setting up the booth, one of the employees asked if we would be interested in using one of their garden carts to help move the pots from the parking lot to the booth space.  I had never heard of a garden cart before.   Not knowing what to expect, I graciously accepted the use of the cart and it was awesome...big huge wheels and a large cargo area looked perfect for moving pots around.

Generally we move pots back and forth in stacks by the armfuls.  One load from the truck consists of four large pots or six small pots wrapped in paper and stacked on each other like pylon cones.  It usually takes fifteen or twenty trips from the truck to the booth depending on the size of the set up.  Using the garden cart, we were able to move ten trips of pots in one trip.  Ten trips to one makes for a pretty fast load in and allows a bit more time to tidy up the booth layout.  Not only was the garden cart good for moving pots but it made getting the display rack to the booth faster.  It usually takes three trips to carry the rack but just one trip with the cart.  Needless to say, we were big fans of the cart and by the end of the show I was wanting one.


I looked the cart over and found a maker's mark.  I even took a few measurements thinking something similar could be built that would suffice.  When we got home after the show, I immediately hopped on the computer and checked out garden carts.  I found several different makers, styles, sizes and prices.  Some were wood, some metal, some were one piece cast poly and even collapsable versions.  Over the next few weeks I researched garden carts like no other.  I read reviews, asked questions via e-mail to get information not found on websites and checked prices.  When it was all said and done there was this awesome garden cart spreadsheet with all the information used to make the big investment decision.

We ended up getting the Carts Vermont cart.  It didn't seem like there was really anything else out there that compared.  The only factor about the cart that had me shying away was the cost and the shipping...it was the most costly of all the carts on the spreadsheet.  It faired better in other areas and thus I felt it would be a much better cart for us in the long run.  By the time I ended up biting the bullet,  the cart it was on sale and I felt much better about the decision.

Carts Vermont makes two different sizes of their garden cart.  We went with the midsize garden cart.  With the size of the pots to the size of the cart, we can put eight stacks of pots in the cart and not have unused space.  It's sort of similar to loading a kiln.  If there is loose or unused space in a kiln you are not being efficient.  The large cart was deeper and the extra depth wasn't necessary.  The large cart was also longer and wider which translated to unused or loose space.  The overall width of the midsize cart (the axel width specifically) makes it possible for us to get the cart through standard doors.  This comes in especially handy when doing indoor shows.  When ordering the cart we chose the semi-pneumatic option for the wheels.  These are a 20" heavy duty wheel with solid rubber tires which eliminate the chance of getting to a show and having a flat on the cart.  The cart is really well balanced and the 20" tall tires also maneuver really well.  They also allow the cart to be let down steps or pulled up steps.  It's not been taken down flights of steps but it navigates 2 to 6 steps easily. 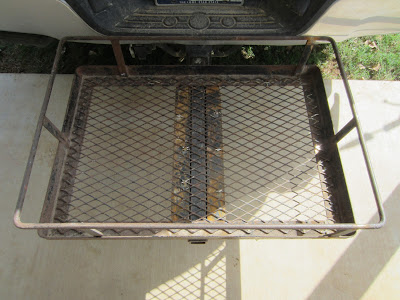 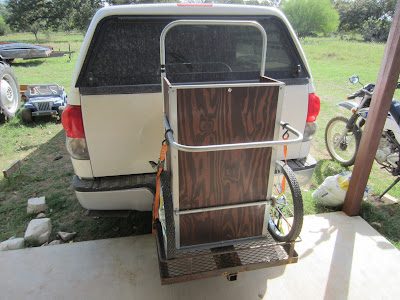 The cart is carried on the back of the truck using one of those receiver hitch cargo carriers.  The way the truck bed packed with pots and the display the cart would not fit in the truck so this was the next best way.  So far this seems to be working out pretty good.

Over all we feel really good about the Carts Vermont decision.  I've been doing shows in Texas for about twenty years and have encountered every load in obstacle imaginable.  We have loaded in during rain storms, upstairs, downstairs, up elevators, in the scorching heat and even in a snow and ice storm once.  We first started moving pots with a hand truck and that never really went well.  Hand trucks are good for tubs and boxes but not really good for pots.  So, before Carts Vermont we have just been carrying pots in and out of shows...I really wish we would have discovered the Carts Vermont garden cart years ago.

Carts Vermont hacked.  Life is all about the hack.  What can be done to make it work better for us, better suit our needs or just make it look cooler or be more fun.  The cart comes disassembled in a pretty good sized box.  After it was all unpacked and accounted for it got it's first hack.  Before the cart was assembled all the wood parts were coated with three coats of polyurethane.  This just seemed like a no brainer.  The cart is being hauled on the back of a truck and has even been rained and sleeted on before.  It's all about protecting the investment. 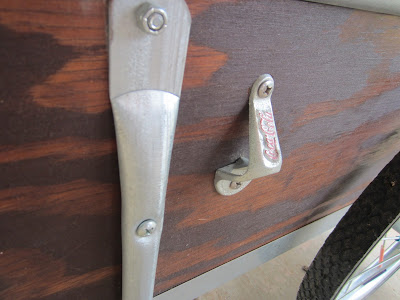 Often times a bottle opener is a very necessary item at a show.  The cart has been fitted with a surface mounted Starr "X" bottle opener which gets good use.  There is also one mounted on the truck just in case the cart isn't close.  We even have booth neighbors who will come by the booth to say hey and open their bottles.  That bottle opener has been a fun conversation starter.  Bring your bottles and come say hey...we will see you at the next show. 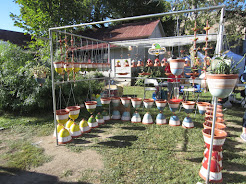 Each pot is wheel thrown, hand carved and brightly glazed. 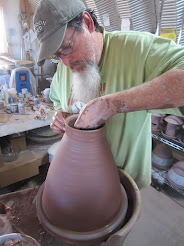